You may recall that we sponsored up and coming golfer from North Berwick – Scott Gillies – at the start of the season. We thought we would update you on his progress to date. 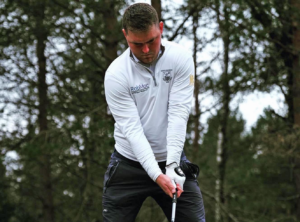 “Since the 11th of April I have competed in 10 tournaments, played 17 competitive rounds and travelled 2,091 miles. My results and scores so far this season have not been as good as I would have liked.

Frustratingly I feel like I have played some of the best golf of my life in terms of ball striking and driving the ball. My driver has long been an achilles heel but was usually made up for with a very reliant short game and steady putter.

Since hiring Robbie King at the start of the winter as my technical coach my golf swing has become much simpler, with fewer moving parts. It was a change which needed to be made if I was to compete at the highest level.

I’ve joined the academy at Swanston to give me a chance to practice off parkland turf with rough around the greens, something I don’t get at North Berwick or Gullane.

I’ve also been to see putting specialist Kenny Monaghan at Stirling. He’s introduced me to a new green reading process called Aimpoint and given me a few things to work on with my set up and stroke. This is very much a work in progress but is starting to bed in better than I thought. It’s nice to feel a strength coming back!

My next event will be the Northern Open at Portlethen Golf Club next week on the Tartan Tour. This is a course with relatively small greens and parkland turf – an exciting test for my short game! ”

At RobMac, we wish Scott all the best and will keep you updated on his progress as the season goes on.